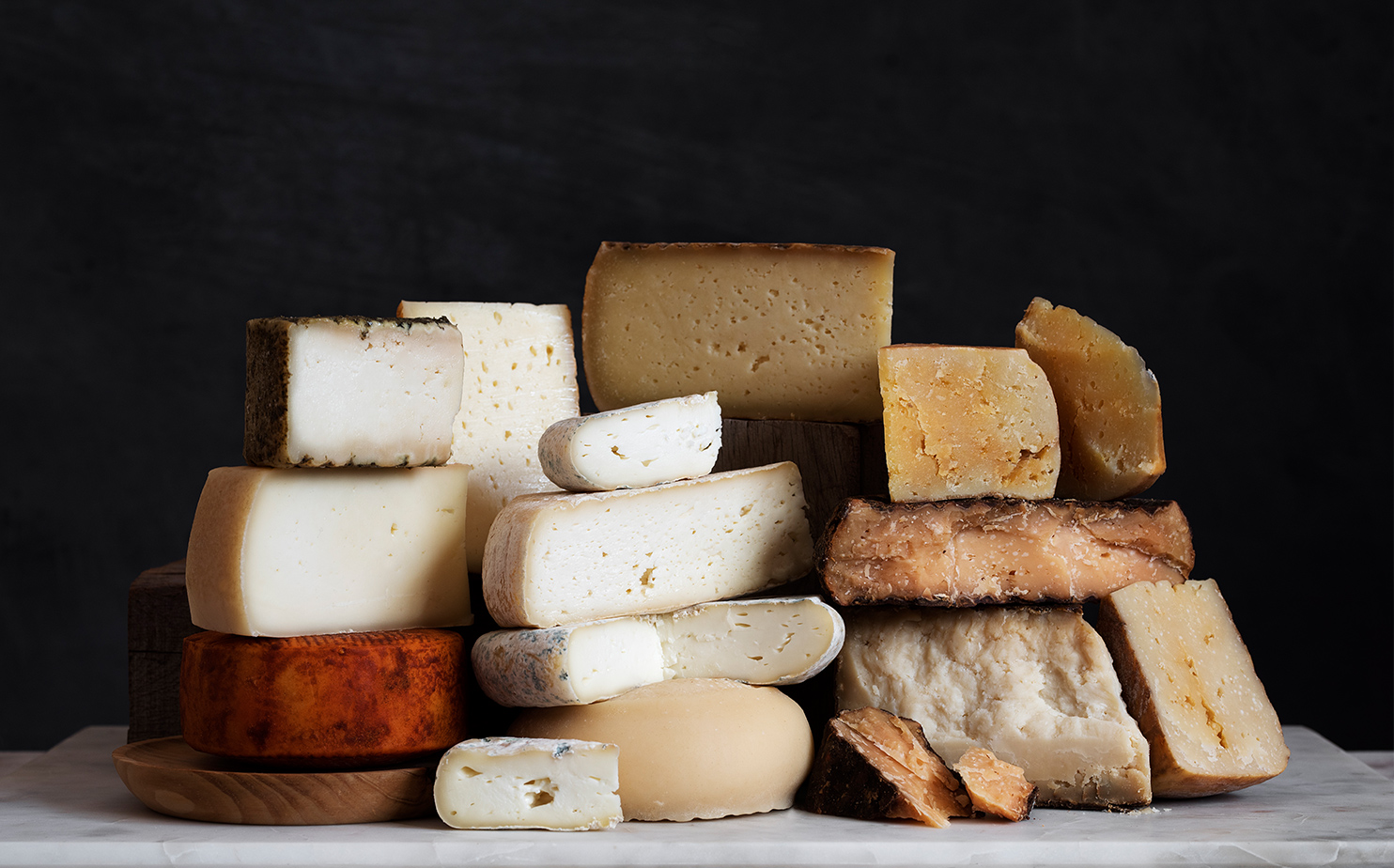 English at the end

The two unrivalled Canarian cheeses: at the latest edition of the World Cheese Awards held in the Norwegian city of Bergen 2018, 35 Canarian cheeses were awarded in the categories of super gold, gold, silver and bronze. Of these, 15 were made in Gran Canaria, a milestone for the island. But of these 35, there are two, the super gold, which compete with the world’s cheese elite.

The Canary Islands’ papas arrugadas, mojos and plantains have a well-deserved reputation, but their fantastic and very particular cheeses are still overlooked on the mainland. It’s time to discover the best.

«This cheese we take it out of the chamber and it walks,» said cheesemaker Cristóbal Antonio Moreno, of El Cortijo de Caideros, referring to his cheese Flor de Guía. Wait, flower of what? The reality is that the cheeses of both Gran Canaria and the rest of the islands are a real unknown to the mainland consumer. However, the experts are recognising their value: in 2018, the World Cheese Awards honoured no more and no less than 35 cheeses from the archipelago, including 15 Gran Canarian cheeses. And I, who tried them at the 1st International Cheese Forum, corroborate that we are missing out on some important delicacies on this side of the country.
Tender, semi-cured, cured and flower cheeses. From Majorero goats, Canarian sheep, Canarian or Friesian cows, pure or mixed. With animal rennet or vegetable rennet. Spread with gofio, paprika or oil. Making cheese is nothing new in Gran Canaria, let alone eating it: there are currently 12 types of Gran Canarian cheeses, some 130 cheese dairies of different sizes, and both Gran Canaria and the rest of the islands are the places where most cheese is consumed per person per year, with a total of 11.16 kilograms per person. Moreover, they have already obtained three designations of origin: La Palma, Gran Canaria and Fuerteventura.

Canary Island sheep from El Cortijo de Caideros. ROSA MOLINERO TRÍAS
«The cheese-making culture is very strong on the islands. There are small and medium-sized cheese dairies, and there are even those who have four small goats and make cheese for their families and neighbours,» says Isidoro Jiménez, master cheesemaker and dairy industry technician for the Canary Islands Government. In other words: Canary Island cheeses are alive and kicking. And no wonder, because most artisan cheesemakers make their products with raw milk, a practice that entails fewer risks in the Canary Islands, as the islands have been declared free of brucellosis by the European Union. This is an advantage: the cheesemakers claim that this gives them a much more complex flavour and also allows the flavours of the cheese to develop more as it matures, which explains why the tradition of refining cheeses is still practised in Gran Canaria.
Gran Canarian cheese may be one of the best remaining examples in Spain of how cheese was made in the past: traditional cheese-making techniques and even cheese maturing in caves have been preserved on all the islands. But in Gran Canaria in particular, transhumant shepherding is still practised, with two shepherds accompanying each other on this kind of holiday for their flocks. This is precisely the case of the sheep of the aforementioned Cortijo de Caideros (400 head) and also those of the Cortijo de Montañón, run by Flora María Gil Mendoza (200 sheep and 40 goats). In summer, both go up to Ayacata, Tejeda, one of the highest points of Gran Canaria, and feed on wild herbs such as tagasaste or escobones, which only exist on the island, something that will give an unusual flavour to their milk and, later, to the cheese. At the beginning of autumn, the cattle return to their stables. There they eat barley, wheat and rye; this process limits production to a specific time of the year.

Half Guide cheese from El Cortijo de Montañón maturing. ROSA MOLINERO TRÍAS
However, Gran Canarian cheeses are not free of problems. The traditional format of micro-cheese dairies is disappearing: the new generations do not want to continue with such a hard-working and undervalued trade. «The life of a cheesemaker is very hard. And people come and haggle with me over the price of the cheeses,» said Flora from El Cortijo El Montañón, who sells her cheese at around 20 euros per kilo. Isidoro Jiménez reflected on this: we don’t mind paying more than 100 euros a kilo for Iberian ham, but we skimp when it comes to cheese, no matter how much work we know goes into making it.

Majoreros with paprika in the tuning company Bolaños. ROSA MOLINERO TRÍAS
According to this master cheesemaker, there are several reasons for this abandonment: very high tariffs for exporting to the peninsula and very low tariffs for importing cheese, something that industrial manufacturers take advantage of to position their cheap product on the market. «The price is the main problem: it has hardly gone up, it has even gone down. However, living and production costs have gone up. The local consumer sometimes doesn’t appreciate it and doesn’t know why one cheese is more expensive than another», Jiménez commented. Likewise, the PDO, which tends to place a product favourably on the market, is something that many have refused to do because they consider that it would not be directly advantageous for their economy.
«We are at a time when there are few families left dedicated to cheese. If we don’t fix this, in 15 years we will have lost them. And with them, a landscape of our islands will also be gone,» said Borja Marrero, of the Texeda restaurant. To prevent this from happening, there is nothing better than knowing a little more about Canary Island cheeses. All the islands produce their own cheeses, but they often only supply local demand. However, it is quite possible that if you live on the mainland, you can find the protected cheeses described below: Quesos de Guía, Majorero and Palmero.

Flor de Guía
Milk: Always raw, from Canarian sheep (minimum 60%), from Canarian cows and/or their crosses (maximum 40%) and from goats of Canarian breeds (up to 10%).
Rennet: Vegetable, with a thistle flower infusion, just like Torta de la Serena or Torta del Casar.
Ripening: 15 days, wrapped in a cloth to keep its shape.
Appearance: Torta weighing about 4 kilos and 4 to 6 centimetres high. Crust soft, thin and elastic, with cracks. Mould imprint on both sides and smooth edges.
Texture: An interior so melting that it is nicknamed ‘the custard cheese’. It has some eyes.
Colour: Pale yellow rind and pearly interior.
Taste: Very milky, barely salty, almost sweet, but with bitter notes that are pronounced in the rind. Reminiscent of olive brine.
Variants: Media Guía cheese is made by mixing vegetable and animal rennet, while Queso de Guía uses only animal rennet and authorised ferments, which is why its flavour is less bitter than that of Flor de Guía. Both cheeses can be cured for more than 60 days, at which point they begin to acquire an effervescent mouthfeel.
Production Area: Santa María de Guía, Gáldar and Moya, Gran Canaria.
Cheese factories: Campo de Guía, Cortijo de Pavón, El Cortijo de Caideros, El Inciensal, La Solana, Las Mesas, Lomo del Palo, Lomo Gordo, Los Altos de Moya, Madre Vieja, Montaña Alta, Pajarito.
Curiosities: The Gomeran chef Braulio Simancas claims its use to butter rice dishes without the need to add any other fat. But as Joan Roca, from El Celler de Can Roca, also said, «it is a cheese to be eaten with a spoon and that’s it». It was first mentioned around 1526.

OTHER CHEESES WITH P.O.D. IN THE CANARY ISLANDS

Milk: Majorero goat’s milk, although up to 15% of Canary Island sheep’s milk may be used. Raw or pasteurised.
Rennet: Animal.
Ripening: Tender, between eight and twenty days; semi-cured, between twenty and sixty days; cured, more than sixty days.
Appearance: Drawings of the cheese press on the underside and top and of the marks – simulated – left by the old moulds made of palm. The rind can be spread with oil, paprika or gofio. It weighs between one and six kilograms.
Colour: From ivory white to yellowish, depending on maturity.
Texture: Compact in the more tender ones; friable (crumbly) in the riper ones. Without eyes (holes).
Flavour: Milky, slightly acidic, a little spicy in the more mature ones.
Production area: In six municipalities of Fuerteventura; Antigua, Betancuria, La Oliva, Pájara, Puerto del Rosario and Tuineje.
Cheese factories: Cañada de Agando, Crigonay, El Convento, El Palmeral, El Pastor Isleño, Guriamen, Julián Díaz, La Atalayeja, La Gambuesa, La Montañeta, La Suerte del Ángel, Los Adejes, Maxorata, Río Cabras, Rosa de la Madera, De Tetir.
Curiosities: It was the first Spanish goat’s cheese to obtain a protected designation of origin in 1996. The version with paprika of the Maxorata brand won the prize for the best cheese in the world at the World Cheese Awards competition in 2018.