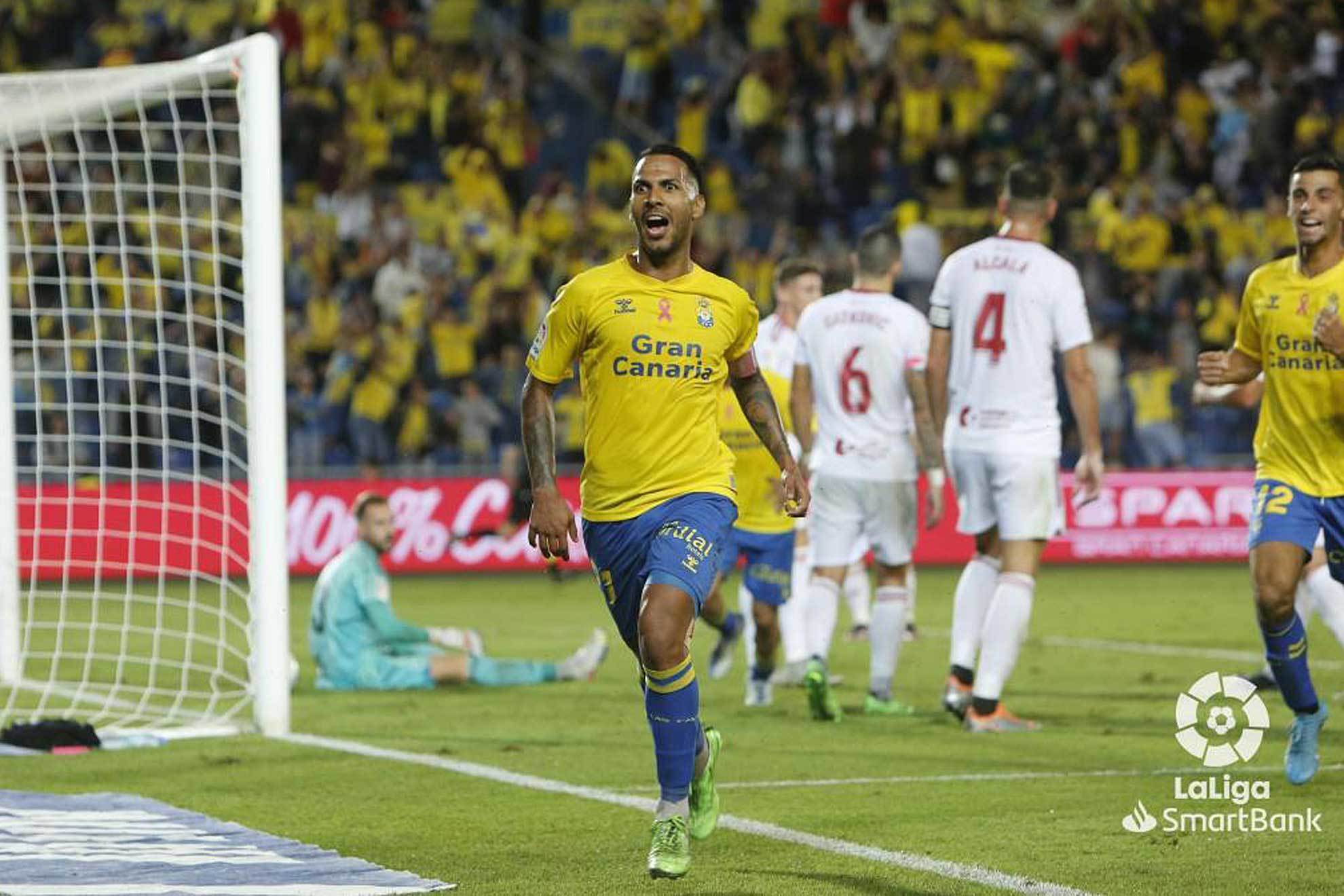 (English at the end, after the Anthem video)

I am going to tell a Canarian story. For all Canarian children….

Many years ago some Englishmen who lived in Las Palmas de Gran Canaria used to run after a ball to put it in the other team’s goal. They played in the sandy areas of the city, in some open field they found, or even on the edge of a ship arriving at the Puerto de la Luz.

Once a Canarian returning from Cuba spoke with other young Canarians from the Triana neighbourhood and they formed a blue and white team which they called Marino Club de Futbol, but they also wanted to have their rallying cry for the matches and they created their battle cry:
«RIQUI RACA RACA ZUMBA VACA RA RA RA RA! MARINO, MARINO! AAAAH».

Another Canary Islander returning from England also formed a football team in Puerto de la Luz, which they called Victoria Club de Futbol, they put the colours black and white, and also adopted the now famous cry of Riqui Raca.

Other neighbourhoods of our city created their own teams, such as Gran Canaria, Atletico and Arenas, and they all played in a football league where the winners were always Victoria or Marino.

In one of their matches Cub Arenas had to play extra time, and if they lost they would be relegated, so three girls started to cheer them with «ARENAS, ARRIBA D’ELLOS!» and with the war cries of these girls Arenas scored three goals winning 4 to 1 and saving the category.

But in those forties of the last century there was not much money, and the championship played by these five teams was on the verge of not being able to continue. Let alone go out to play outside our island.

But football was very important for everyone in Gran Canaria, for the footballers and for the children who followed them, and sadness came to the hearts of all Gran Canarians: WE ARE LEFT WITHOUT FOOTBALL …….!

Then a man called Manuel Rodríguez Monroy came up with an idea: I am going to unite the five teams into one, Victoria, Marino, Atlético, Gran Canaria and Arenas, and I will make one very good team.

But, of course, what will happen with the five teams? The three girls who cheered for Arenas with the Arriba D’ellos, will they allow their Arenas to disappear?

….. And the fans of Victoria, who have the black and white of the English team Newcastle, which is one of the best….. and Marino, who have just inaugurated the Las Palmas stadium, the best football pitch in the Canaries……

And Atletic Club, which carries the Atlético de Madrid crest, changing the Strawberry Tree for a Dog and a Palm Tree, which belongs to an Italian, how can it allow its history to be lost?

I think my dream is over. It’s a great idea, but it’s very difficult to do so… …….. Hey, what if we talk to Vicente Di Napoli, that Italian owner of the Atletic Club, to help us with the other teams?

One night in 1949 that Rodríguez Monroy couldn’t sleep, he was tossing and turning in bed thinking that Gran Canaria would be left without a football league, he got up and said to himself: RIQUI RACA, ARRIBA D’ELLOS……

We have to get everyone excited, the players, the directors, the fans, WE ARE GOING TO MAKE THE BEST TEAM IN THE WORLD, a team that will wear Blue and Yellow, that will play with exquisite technique, we will let the others run and we will make the ball run. And we will play in the INSULAR STADIUM…..

And with Adolfo Miranda and José del Rio Amor, and others, all together, they managed to turn the hearts of the five teams into a very big heart called UNION DEPORTIVA LAS PALMAS.

And the team that was formed was so good that in two consecutive seasons, 1949 and 1950, they were promoted from the regional teams to the First Division. After that historic achievement there are many to tell.

The little team grew like a family, and there was a man called Jesús García Panasco, who took an interest in the younger players, talked to them, listened to them, and told them that if they wanted to play as starters they had to study, as coach Luis Molowny had told him. He told them to work hard outside of football as well.

Afternoons and evenings of whole families in the Estadio Insular, grandparents, parents and children singing to cheer on the little team. Tonono who cuts and cuts and gives it to Guedes to change the play forty metres to the other end where León was waiting for the ball. Or he sent it just over the line and past the defenders for Gilberto to out-run everyone and get close to the goal. Or he would pass it to Germán, who would dribble two or three times, fool the goalkeeper and the whole Insular would rise to its feet with the most beautiful cry in football: Goooool!

But we ended the story with the same illusion with which we started it: Our yellow team is UNIQUE in the world. This year we will go up to the First Division to play against Betis and Osasuna, and our children and youngsters will sing ARRIBA D’ELLOS, EL RIQUI RACA and EL PIO PIO.