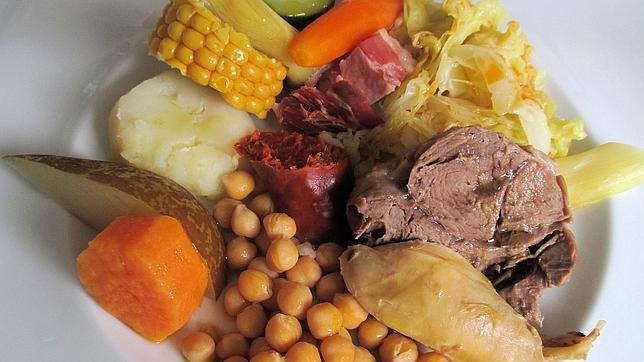 The Puchero canario is one more of the many that will be made throughout Spain. As in every kitchen the most important thing will be the cook and the ingredients that are used. I just tasted a pout that turned out to be a marvel. Of course, the ingredients, as I said before, are very important. This pout had potatoes of punta, from here from Gran Canaria, free-range chicken that you buy in any super, a piece of chorizo that I bring from Cáceres, from where I also bring the Portuguese coffee, and some chickpeas that I bought with my friend Tomás Gil when I was in his native Cordoba a few months ago.

The cook my wife, Montse Darias, who casts him to the greyhound. All the Darias were great cooks; Enrique Darias, who founded the current La Cocotte in León and Castillo, had his first steps in the kitchen in London in the 1960s, when the canaries had to emigrate to pursue a future. He started with a prick and ended up with a restaurant in Lancashire that was very successful. In the 1990s he returned to Gran Canaria and opened the Restaurant La Cocotte on the ground floor of the Hotel Reina Isabel, also with great success. And then he decided to open the current La Cocotte food store run by his daughter Emma. For a few years he brought hunting birds from London and made pates only for family and friends.  An unrepeatable delicacy, a culinary gem. Enrique Darias, one of the greats in the kitchen.

Therefore this pout has a certain tradition behind it. My mother-in-law, Yeya, as we called her as a family, was a self-made cook; Surely with the influences of Henry’s mother, he made exquisite stews with products of the land, and his sweets and Christmas trout were a spectacle for the family and for the neighbors of the neighborhood.

I think I’ve enjoyed this pout so much because of that tradition. Quica, Enrique’s mother; my mother-in-law Rosario Martín Yeya, a woman ahead of her time and an extraordinary cook; Enrique Darias one of the best chefs I know, no doubt among the greats I have ever met; and Montse Darias who has continued with that special talent of taste, taste, palate…………………..