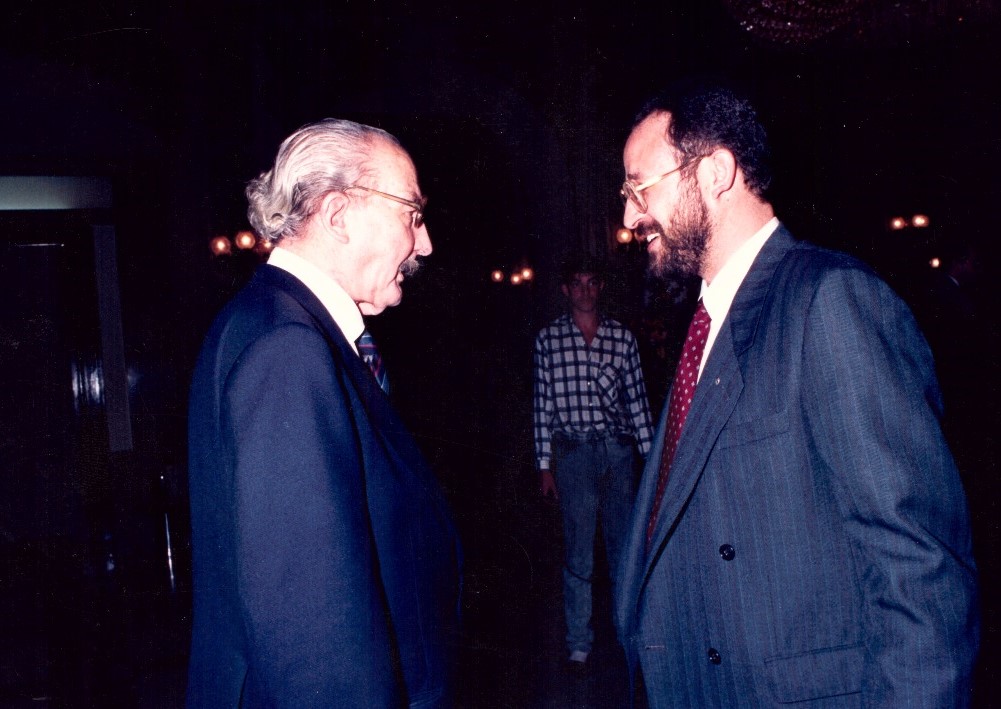 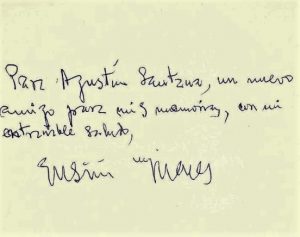 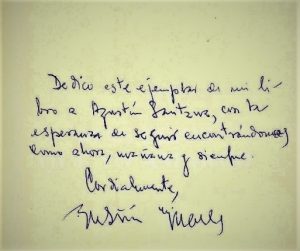 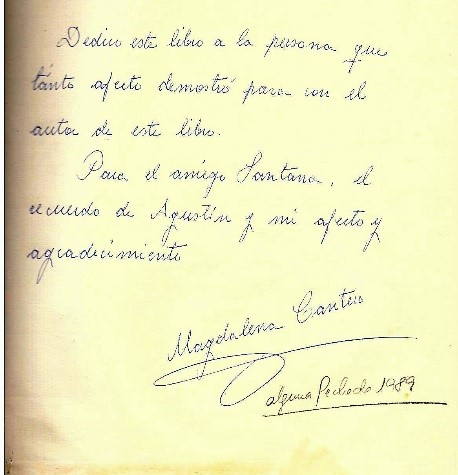 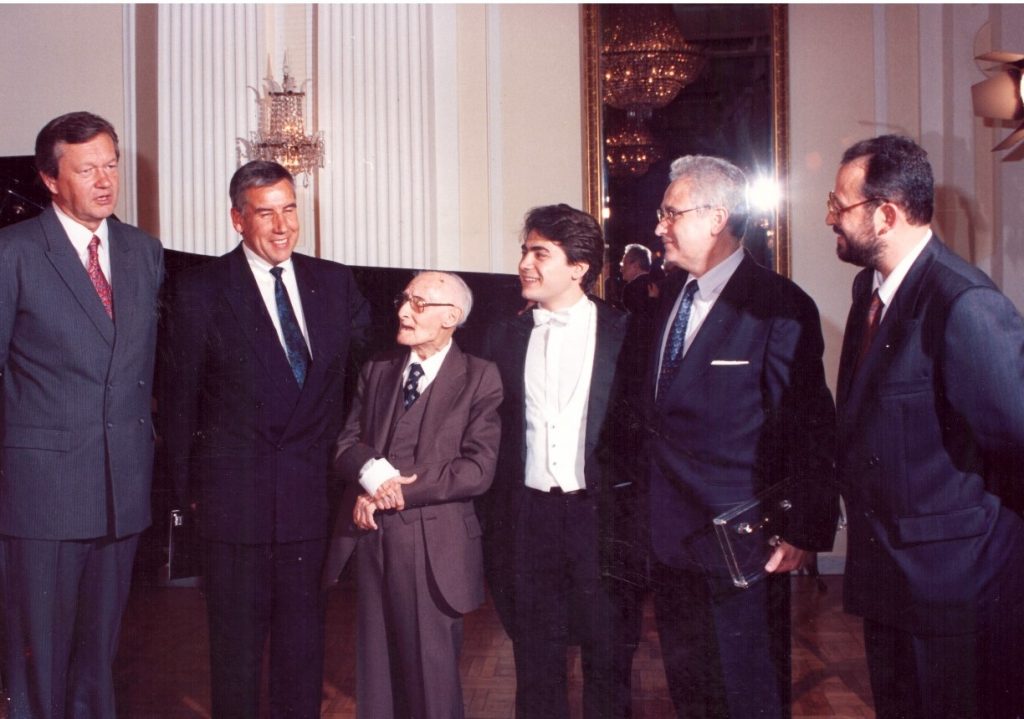 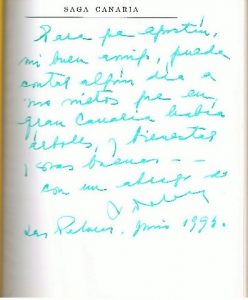 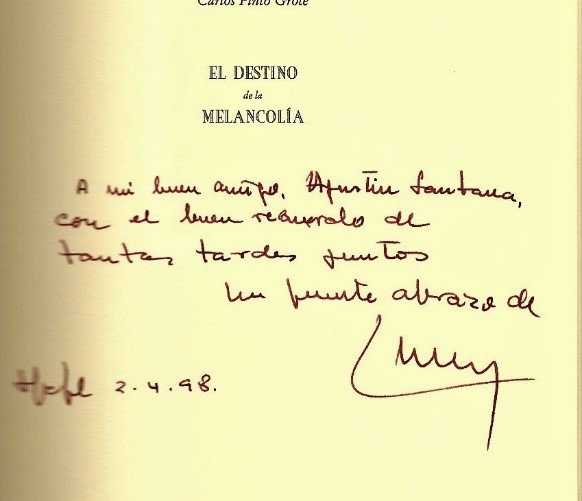 Olympia Canarias developed the Montblanc Prize for Culture in the Canary Islands in the 1990s, which gave me the opportunity to meet the greatest artists and creators of the Canary Islands. With high-level juries, personal experiences throughout the ten years that passed from 1987 to 1997 were recorded forever. And what most impressed me was the great humility of most of these creators who left their mark throughout the Canary Islands. In 1988 we paid tribute to Agustín Millares Sall, at the Hotel Santa Catalina, with a performance by the Gofiones, and Domingo Pérez Minik at the Botanical Hotel in Puerto de la Cruz with the performance of the Sabandeños. In both cases, Alberto Omar presented them. From there the Montblanc Prize was born in the Canary Islands. It is only about experiences, and not analysis or criticism, for which of course I would not dare in any case.

I had a lot of contact with Agustín Millares, before the day of the tribute at the Hotel Santa Catalina and later at his house in Escaleritas. I visited him several times, and he received me at his house sitting with a plaid blanket on his feet, and with his wife Magdalena Cantero preparing coffee for the three of them. It was very late in his life, the following year he would pass away, but I was left with the joy of having met him and knowing that he was very happy with this tribute that we offered him, and he told me so on several occasions. He was the first social poet in Spain, who was ahead of the social movement of Spanish poets in 1950 in 1947. A man who allowed himself to be loved and wanted. His dedicated books are already from my grandchildren. In 1989 Magdaleno Cantero dedicated the book Salva de Jugueterías to me. He lovingly kept the photo album that Cesar Honaine made us on the day of the tribute. In 2018 I handed it over to Sergio Millares; in the Millares family is where that precious memory will be best.

“I go back to the charge and I tell you: here there is no place to hide my head under the wing, to say I didn’t know it, I’m on the sidelines, I live in my tower alone and I don’t know anything. I tell you and I repeat that it is not worth it ”. (Live Talk, 1964)

«Farther than I am bitter, than I am gray, that I have broken, that I have been wounded, that I, in short, my heart racing for all this I say and the rest that I remain silent, the hatred closed, the sad delirium in blood housed so long, the insane cry will go away. ” (Farther Than Me Bitter, 1987)

He was Special Mention of the 1991 Montblanc Music Prize for Santa Cruz de Tenerife. He was not as well known as the other winners this year, Lothar Siemens, Doña Lola de la Torre and Agustín León Ara, but his advanced age, 93 years, and his health problems, caught my attention. On the day of the awards ceremony he was very excited. Weeks after the awards ceremony we went to visit his house on Calle del Castillo and I was struck by his sensitivity and emotion; He could not move from the chair in which he received us, but his hands wanted to hug us and his face reflected immense happiness. He told us that it had been the happiest day of his life, that this award had given him life. Some of his works, «Christmas in Tenerife» and Sonata for cello and piano. Elegy ”, recently recorded in 2019 by Angel G. Jermann and Jesús Madrigal with the Philadelphia Orchestra conducted by Eugene Ormandy.

The professor, researcher and musicologist Rosario Alvarez Martínez, who belonged to the Jury in Santa Cruz de Tenerife, and luckily participated in the juries of the following three editions for the award, presented Don Manuel with her knowledge as a teacher of the teacher. A real pleasure to have it in all the juries. (Manuel Bonnín Guerín, A Life for Music, 1989)

In 1993 the award was dedicated to Literature and was an explosion of written and spoken expression. The winners Manuel González Sosa, Josefina de la Torre Millares (1907-2002), Isaac de Vega Gil (1920-2014) and Enrique Romeu Palazuelos (1906-2001). The Young Values ​​José Manuel Marrero Henríquez and Roberto A. Cabrera.

With all of them, at meetings or at the awards ceremony, in cafes or on the phone, learning about life and art was continuous. Impossible to remember or talk about one or more, I will try to be as brief as possible.

When the jury decided to give the award for Las Palmas to Manuel González Sosa, the unknown, expressed by his friend María Dolores de la Fe, was that he accepted the award and also came to collect it. This was the humility of our poet from Santa María de Guia, who carried her in all her personality and gave it away in spurts with no intention of giving lessons or excelling, on the contrary, she liked the serenity, the calm gaze, the expression of good man without a doubt. (Italian backlight, 1993)
The jury was at the expense of Maria Dolores talking to him, and she herself confessed that it would not be an easy task, but we were surely if someone got her to accept it would be that woman canary, friendly, happy, happy, journalist, writer, mother, friend, wonderful woman María Dolores. And of course he succeeded. (Canary saga, 1995)

4.- Bringing Josefina de la Torre Millares in 1993 to her native Gran Canaria was an event in the art world in the Canary Islands. It was a magnificent experience to meet this great actress and listen to her presentation

5.- With Manolo Padorno I had few encounters, but they were all very pleasant memories and an essential book to know the Playa de las Canteras: Towards another reality, 2000Tusquet, where the Light Factory starts the Beach every day, from his house in Punta Brava.  POEM:

WAY OF MY WINDOW

I started walking along a path that led to the light factory. A path, in addition, that ended in front of my house, just when opening the window that overlooks the sea. Without thinking, I became one more worker, one of those who opened the largest invisible floodgates,

light blue transparencies, and greased the highest pistons, the pulleys, that made the Atlantic morning. After a long time, so many years of learning the trade, turned into an already specialized worker, I was entrusted to give the light of day. As a professional, I dedicate myself

to carry out the entrusted task hardly known by my neighborhood. I began to walk along a path that ended in front of my window.

Where I strike the great machinery

6.- Carlos Pinto Grote, psychiatrist, poet, music lover and a dear host at his house on Hermano Pedro de La Laguna street. He was a member of the jury in 1993 in Santa Cruz de Tenerife for Literature and has already followed us in the next two editions. Elegant, kind, loving, great conversationalist.

I was at his house several times, at twelve in the morning, with a shot of whiskey before starting the walk around

those old walls. One of them with my son Alberto, that as a philologist, he enjoyed the tour that he made for his

beautiful corners, the music room, the bookstore, the room of guests with the signature of José Hierro and Pedro Lezcano. The Destiny of Melancholy, dedicated to his wife Delia, was his last work in 1999.

7.- Guillermo García Alcalde was a permanent member of the Jury and participated in all four editions. You are constantly learning from Guillermo, he has extensive knowledge of any cultural or artistic subject, and I believe that his contributions to the Canary Islands in culture have been important enough for him to be officially recognized institutionally.

Jerónimo Saavedra is undoubtedly one of the great figures of the Canaries, who already occupies a special place in all Canaries. For his political achievements, for his social responsibilities, and for his knowledge and wisdom. It is a great asset to the history of the Canary Islands, and it will be recognized as one of the greatest canaries ever.

Being the President of Las Palmas Acoge, in 2002, he visited us at our main headquarters on Calle Tecén and got to know our facilities and projects on site. I was preparing a cycle on immigration for the Summer University of Adeje and he invited me to participate in the conference «IMMIGRATION: COMPLEX AND NECESSARY PHENOMENON», as part of the course on immigration he shared in the south of Tenerife.

The conference was coordinated by Jerónimo and the speakers were Gerardo Mesa Noda, as President of the Red Cross in Fuerteventura, and I as President of Las Palmas Acoge in the Canary Islands. It was an unforgettable experience to transfer to the students of the Summer University of Adeje, in July 2002, the problems that immigration entails, the need to welcome, with all services, so many people who flee their countries to save their lives and those of their families, and ensure that they join our society with training that allows them to actively participate in the personal and social development of this other side of the world.

In the next post I will talk about the artists of La Pintura 1995 and Arquitectura 1997 that went through the Montblanc Prize.