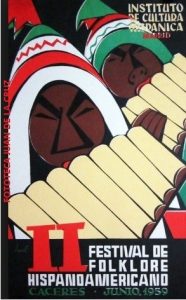 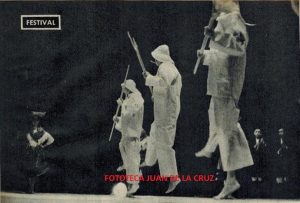 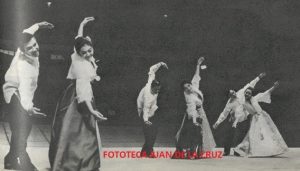 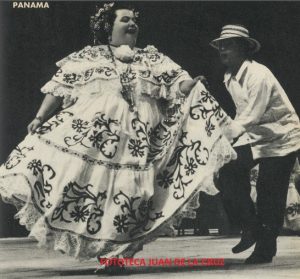 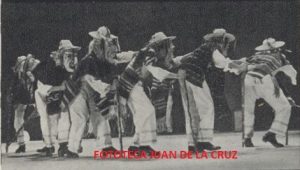 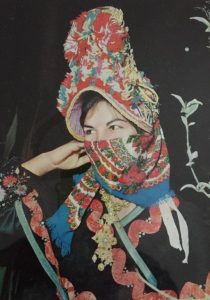 «The Hispano-American, Portuguese-Philippine Folklore Festivals, which were born in 1958, made Cáceres, Plaza Mayor de la Hispanidad».

In 1958, the Spanish-American-Portuguese-Philippine Folklore Festivals started in Cáceres.

A surprising and beautiful spectacle, with a wide and very rich sample of typical songs and dances from the different countries participating in the event, which, from the beginning, enjoyed an extraordinary welcome and popular support from the people of Cáceres.

It was an original folkloric event with Colombian cumbias, Portuguese corridinhos, Panamanian tamboritos, fandangos, Dominican merengues, muñeiras, Uruguayan pericones, Philippine tinikling, Venezuelan joropos, Mexican jarabes tapatíos, jotas, of a surprising beauty, throughout the three days of the Festivals, covered with brilliance and relief, of admiration and collective enthusiasm, which ended with the awarding of the prizes as well as a great multicoloured snake through the bullring, formed by all the dancers and the audience, to the chords of the most typical Cáceres jota, the ochocentista dance «El Redoble», which is performed in most of the popular celebrations that take place in Cáceres.

These Folklore Festivals, under the auspices of the Instituto de Cultura Hispánica, were born with the common denominator of the presence of Cáceres in the Discovery of America and in the solemn seat of the Hispanic world.

In this event, of a significant identity in Cáceres, from the first to the last of the Folk Festivals, in the most diverse and varied corners of the city, at any time, you could find cheerful groups with their instruments, with their songs, with their dances, with their colourful folk costumes, turning Cáceres, as it was declared during one of the first contests, into the Plaza Mayor de la Hispanidad, in a fair reference to the epic of the conquistadors of Cáceres.

An annual event of great importance and impeccable traditional and ethnographic relief, made up of very diverse and beautiful images, taken from the typical customs of the sister countries and regions, which were engraved in the soul of all the people of Cáceres, which were spread and expanded throughout the world by constituting a twinning of the different nations, under the embrace of the national flags, in the headquarters of the city of Cáceres. The people of Cáceres enjoyed those Festivals in a vibrant way, as the elders remember, because it became an event with its own specific identity in those last days of the month of June.

Folklore groups from Colombia, Chile, Philippines, Panama, Portugal, Argentina, Bolivia, Ecuador, Nicaragua, Paraguay, Peru, Galicia, Zamora, Andalusia, Zaragoza, Canary Islands, Guipúzcoa, Plasencia, Cieza, Cáceres, and others, showed and represented on the huge stage a whole series of evolutions, with their typical songs and dances, leaving evidence of the richness, magic, essence and flavour of the traditional folklore of the people who came together in the Festivals.

A spectacle that the city of Cáceres lived and followed, from year to year, with a great participative interest from the ritual of the beauty of the popular song and dance.

Then, one day, due to the usual political circumstances, the Hispano-American, Portuguese-Philippine Folklore Festivals, established in Cáceres as what it was, a very original and well-worked festival of its own, began to cross paths with the Spanish Festivals, sponsored by the Ministry of Information and Tourism. That was the beginning of their decline. Until one day they disappeared from the festive panorama of Cáceres, losing, unfortunately, all the richness and momentum that had been generated through the efforts, sacrifices and eagerness of many people from Cáceres.

One year later, in 1968, while the Hispano-American, Luso-Philippine Folklore Festivals of Cáceres had already faded away, with great regret, the First International Mediterranean Folklore Festival started in Murcia, in whose second edition the group of Choirs and Dances of the Women’s Section of Cáceres took part, and which next July, as it has been recently announced, will celebrate its LIV edition, having acquired the rank of Festival of Regional Interest in the Community of Murcia.

Why was it decided to suspend the Folklore Festivals of Cáceres, when all the adversities of its beginnings had already been overcome, and when, in addition, it had found the greatest support in the embassies of the different Latin American countries, with their representations in the Festivals, and with their collaboration for the presence of the respective folkloric groups in the contest?

Things true? They will be. Or not, as many of those who occupy political seats emphasise, getting out of the way. But some hand, one of those with so much power in the political offices in Madrid, one bad day left Cáceres without a reference of great.

Consideration and a watchtower for the name and the image of Cáceres as the one that came out of those extraordinary and very beautiful Spanish-American, Portuguese-Philippine Folklore Festivals, which had a special seal of identity in our city.