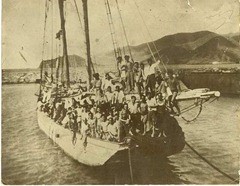 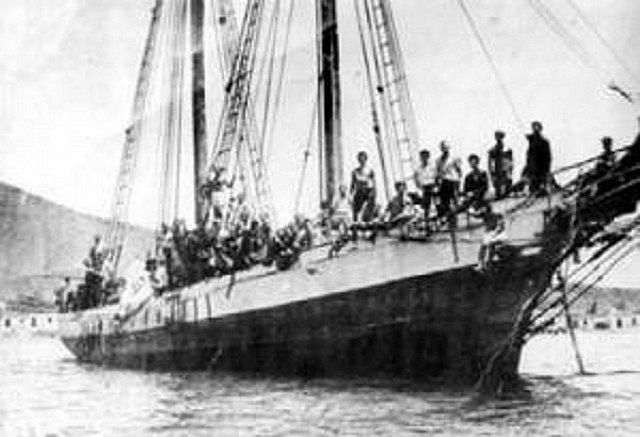 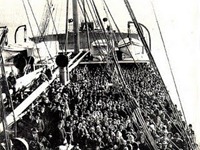 «Canary Islands is in Africa. It has a strategic position for sea routes. Canaries are 25% North African. In eight years of the twentieth century 128,000 canaries left the islands, crammed into sailing boats (Juan Francisco Martín Ruiz, Professor of the ULL). More than 80,000 Venezuelans are descendants of Canaries.» 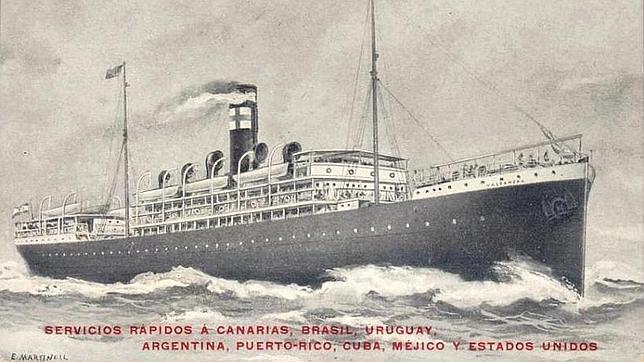 The geographical position of the Canary Islands has served as a bridge between Spain and the Americas. Since the 15th century the Canaries have emigrated into large groups to settle in the New World, mainly in Cuba and Venezuela. In the 18th century it was claimed that more canaries lived in the Americas than on the islands.
Venezuela is considered to be the country in the world with the largest Canarian population and it is common to say both on the islands and in the American country that «Venezuela is the eighth island of the Canary Islands»
A recent study that referred to 400 adult men and women from all islands estimated that the Canarian population, at the autosomal level, is 75% European, 22% North African and 3% sub-Saharan.
Most Canaries are tolerant and supportive of immigration, but we must make an effort to ensure that a minority, who do not understand its complexity and inevitable reality, understand migration flows from human rights.
Canaries migrate in much more than the emigration we have received and received today. It is false that immigrants have a paycheck, nor privileges above the Spaniards. On the contrary, they are not properly treated. It is true that Europe must act at source, and always apply human rights when migration irregularities occur

September 10, 1919, sinking of Valbanera steam in Havana: At least 408 canaries died.
On 10 August 1919 the Valbanera (Pinillos) departed the port of Barcelona, made a stopover in the Canary Islands and continued on its way to Santiago de Cuba with 1,142 passengers and 88 crew members. On September 5, he arrived in Santiago de Cuba where 742 passengers disembarked. On September 7, 1919, he sailed from Santiago de Cuba to Havana, knowing the imminence of a hurricane. On September 9, the steamer tried to enter the port in Havana but the storm prevented it. The ship was wrecked because of the heavy storm on September 10 off the coast of Florida. 488 people lost their lives in the shipwreck, which is considered the greatest Spanish maritime tragedy in peacetime. 408 were canaries.

April 26, 1994, The Province, Agustín Santana:
«A few months ago a survey on racism was published in the newspaper El País, conducted among young Spaniards, and the result seemed alarming: racism amounted in our youth to 40%. In our local press last Sunday, a tough article was published attacking Hindus, Chinese and Koreans. Fortunately the councilor of culture of the City of Las Palmas, Cristóbal García del Rosario, published an article, with a magnificent vision of the problem of immigration, making it clear that Las Palmas de Gran Canaria has always been characterized by its cosmopolitan character and the integration of peoples of the most diverse origins. And we must also be happy because a group of people, with the Jesuit Fernando Motas at the head, without means but with all the love of the world, are working hard to condition a house on Juan Rejón street, where the association Las Palmas Acoge will finally have a headquarters. In this way the Canaries corroborate our hospitality, our tolerance and our solidarity.»

June 3, 1997, The Province, Sergio Dominguez Jaén:
«On a May afternoon I arrive at number 29 Juan Rejón where the headquarters of Las Palmas Acoge is located. It’s time for Spanish immigrant classes, a fundamental tool for conveying needs. In a hallway some people, of various nationalities, wait to shower. In one room, a volunteer teaches a family. In another, one volunteer teaches Moroccans Spanish. Maria Jesús Reguera, the social worker hired by the organization, explains that in this headquarters of Juan Rejón they provide medical, legal service, workshops and classes for immigrants, and in Salvador Cuyás street a hostel only for men, women are put in contact with other associations. For Mary Jesus the problem of immigration is structural and the first link in this chain of pain is in their countries of origin.»

November 15, 2002, La Provincia, Lara Carrascosa:
«The Network welcomes the «inhuman situation» of immigrants on the islands.» «The four centers of the NGO in the province of Las Palmas (headquarters in Tecén street, second headquarters in Tinguaro Street, Sur Acoge in Vecindario and Lanzarote Acoge) serve 18,000 people a year / The organization denounces the failure of the reform of the Law on Aliens.»
The Host Network presented yesterday its XXII Ordinary General Assembly, which is held in the Grancanarian capital this weekend with more than 60 representatives of the 23 organizations that make up the Federation for Immigrants at the state level. The inauguration of the Assembly will take place today at CICCA where Sonia Rodríguez, President of the Welcome Network, and Agustín Santana, President of Las Palmas Acoge, will take part. Pepe Dámaso, in solidarity with the Association, has painted the assembly poster.
At 13:00 an excerpt from a work by Congolese author Charly Ludevilla, housed in a centre in Las Palmas Acoge, and performed by 17 immigrants from nine African countries will be depicted.»

2012, Closure of Las Palmas Welcomes:
Las Palmas Acoge carried out its work in 1993 in the offices of Caritas with a President and a few volunteers. The Jesuit Fernando Motas, parish priest of the Church of Light in the Islet at that time, with a lot of vision for the future, proposed to a group of people take responsibility for the association to prepare it for the coming years. He took responsibility for the presidency, rented an old house in very bad condition in Juan Rejón 29, conditioned it themselves, furnished it and launched it in 1994 with (approx.) three employees and thirty volunteers.
Six years later, in 2000, it had three offices in Gran Canaria and one in Lanzarote, belonged to the Acoge Network of Spain, serving more than 18,000 immigrants, reception and control service, doctor, meals in canteens and in distribution, hostel, legal service, Spanish classes, general training classes, insertion into Canarian society or road to its destination in Europe.
This service, absolutely necessary on our islands, islands of emigration and immigration, which coordinated with Caritas and with the Red Cross, responding to the great problem of the arrival of pateras at our expenses, this service of Las Palmas Acoge was forced to close the institution in 2012 by the lack of funding caused by the dissatism, irresponsibility and low vision of the future of our politicians, who spend large amounts of money on non-fundamental issues and little on those of Human Rights and Solidarity.

Las Palmas Acoge owns the two buildings of Tecén street and Tinguaro, therefore it is a public service property, perfectly prepared to serve immigrants. Due to the increased migratory pressure in recent months, its President, the lawyer Manuel Dévora, has offered the City Council of Las Palmas de Gran Canaria and the Government of the Canary Islands to put the necessary means and use the premises. Before, now and we will always be necessary, because of our status as Atlantic islands, close to Africa, a bridge between the first and second worlds. Land of migrants and immigrants. Host land.